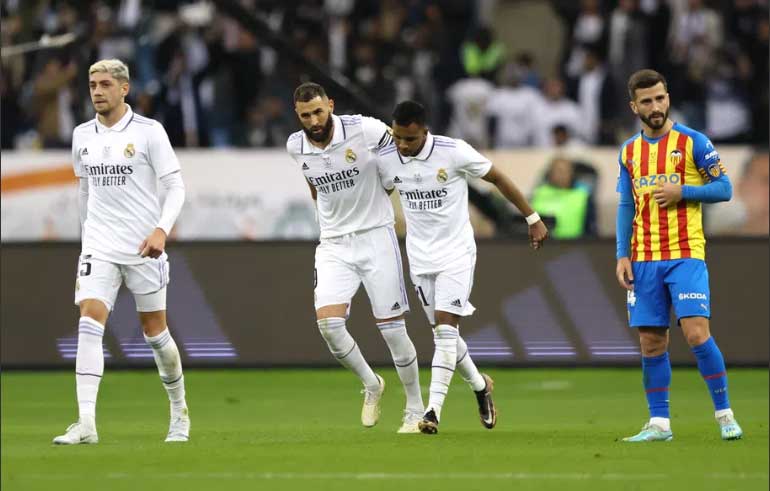 Real Madrid earned a hard-fought penalty shootout victory over Valencia in the Spanish Super Cup semi-finals. In regular time, the match ended with a score of 1:1, as the "white ballet" took the lead through Karim Benzema from a penalty in the 39th minute, and the "bats" equalized through Samuel Lino in the 46th. In extra time, the goals did not fall, and in the penalty shootout, the Madrid players showed stronger nerves and realized all their performances, while their opponent missed twice and with 4:2 Real won the match, although they did not impress with their effectiveness in front of the opponent's goal.

Gennaro Gattuso had decided to oppose Edinson Cavani and Justin Kluivert in attack. Yunus Moussa and Andre Almeida played in the midfield, and Samuel Lino and Tony Lato started on the wings.

The first situation in front of one of the two goals was in the 5th minute. Then Eder Militao shot a header after a corner, but sent the ball over the goal. In the 10th minute, Real had another interesting situation. Rodrigo broke behind the defense but had to shoot from a small angle and failed to find the outline of the goal.

The "White Ballet" continued to be more active and in the 14th minute, Benzema burst into speed, but his shot was also not in the outline of the goal. A minute later, Fede Valverde also shot very dangerously outside the penalty area, with the ball going dangerously wide near the beam.

However, the first accurate shot in the match was the work of Edinson Cavani. In the 19th minute, he headed quite dangerously and Thibaut Courtois had to make his first save of the game. Then in the 22nd minute, Lino also attempted a long-range shot, the ball going fairly close over the crossbar.

In the 37th minute, Karim Benzema broke away from behind the defense, broke into the penalty area, where he was tripped by an opponent's defender. The Frenchman took it upon himself to take the penalty kick and coolly converted for 1:0.

In the first minute of the second half, Valencia restored the tie. Toni Lato sent in a sharp cross from the right and Samuel Lino was dropped at the far post, where he volleyed the ball into the goal for 1:1.

Real reacted quickly and in the 51st minute Benzema fired a dangerous shot that forced Mamardashvili to make his first save of the match. At the corner that followed, Nacho headed dangerously, but wide of the goal.

After that, the game evened out and the pace dropped quite a bit. The bad news for Real was that Carlo Ancelotti had to make two forced substitutions of Lucas Vazquez in the 69th minute and Eder Militao in the 74th minute. It wasn't until the 88th minute that something more interesting happened in front of either goal . Benzema received a wonderful cross near the goal but his header went over the crossbar.

In the 5th minute of added time, Real had a wonderful chance to decide everything. Vinicius found himself unmarked meters from goal, but got in the way and his shot was blocked by the keeper.

A minute later, Fede Valverde also tested Mamardashvili's reflexes with a powerful shot from distance, but the keeper was in his place again.

In the end, no winner was announced in regular time and extra time had to be played.

Already at the beginning of the first of them, Mamardashvili was again put under pressure after a shot by Vinicius from the edge of the penalty area, but the guard again intervened brilliantly. In the 105th minute, Mamardashvili was again the last barrier in front of the goal after a dangerous long shot by Toni Kroos. At the beginning of the second overtime, Valencia also missed a great chance. Fran Perez came face to face with Thibaut Courtois but was unable to overcome him.

In the 119th minute, Marco Asensio shot from a foul on the ground and managed to send the ball under the wall, but it didn't cause too much trouble for Mamardashvili, who confidently caught it.

So the winner had to be decided by penalties. For Real, Karim Benzema, Luka Modric, Toni Kroos and Marco Asinsio were faultless, while for Valencia Eray Jumert and Jose Gaya missed from the penalty spot and so the victory went to Madrid. In this way, Real are now in the final of the tournament, where they await the winner of the other semi-final between Betis and Barcelona.