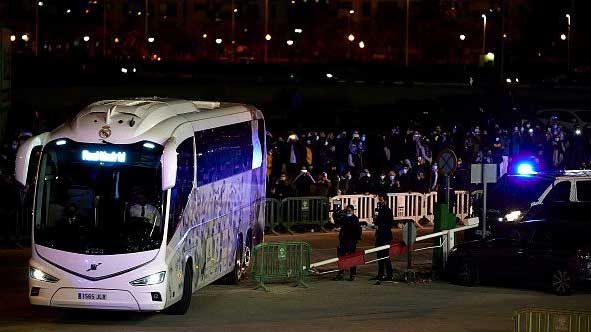 Athletic Bilbao have qualified for the semi-finals of the Copa del Rey in Spain after eliminating Real Madrid 1-0 in the quarter-finals of the match.

Reserve Alex Berenger scored the invaluable winning goal for the Basques in the 89th minute of the match. So the Basques took revenge for the loss in the clash for the Spanish Super Cup two weeks ago, when they lost to Real Madrid.

For Athletic, the success is even more valuable due to the fact that in the previous round they eliminated another of the leading clubs in Spain - the Catalan grand Barcelona after 3: 2.

Madrid coach Carlo Ancelotti had chosen a strong starting lineup for the visit of the tough Basque team, although he could not count on the star striker Karim Benzema, who suffers from a minor injury received in the match with Elche.

From the first minute, the guests from Madrid made a request that they would seek victory by moving forward, but never managed to hinder the hosts, who were encouraged from the stands.

In the 8th minute, Casemiro prevented danger in front of the door, and only 60 seconds later Thibaut Courtois had to intervene decisively after a powerful shot by Danny Garcia.

Real Madrid responded with an attack through Vinicius, but the Brazilian decided to play alone and missed from a favorable position. In the 14th minute, Militao also failed to hit the target.

Madrid briefly gave the initiative to the hosts, which led to a dangerous blow to Minouaine in the 24th minute. The powerful pressure of the hosts continued, as the Basques did not allow Madrid to leave their half often.

Madrid gave the initiative to the hosts, which led to a dangerous blow to Minouaine in the 24th minute. The powerful pressure of the hosts continued, as the Basques did not allow Madrid to leave their half often. The blows in favor of the Basques in the direction of Real's goal were increasing, but they lacked accuracy.

In the 45th minute, the hosts received a heavy blow after Nico Williams was forcibly replaced after receiving a sprain in another attack of Athletic. By the end of the half, Real tried to take advantage of their temporary numerical superiority on the field, but failed to reach anything.

So the intrigue was preserved for the second part. The home players continued to play more actively. In the 48th minute Martinez overtook Courtois in a fight for a high ball, managed to direct it in the right direction, but did not find the gal. In the 50th minute there was a new dangerous situation in front of Real's door, which was reviewed by VAR for alleged play with the hand of a player from Madrid, but no penalty was reached.

Athletic continued to dominate and did not allow Real to create positions. In the 60th minute, the coach of Madrid Carlo Ancelotti resorted to an important change, removing Vinicius at the expense of Isco.

The Basques continued to delight their fans with more active play, but as the end of the match approached, their actions became rougher. A quarter of an hour before the end, Ancelotti replaced Tony Kroos with Camavinga in search of even more decisive change.

Ten minutes before the end Real created a great opportunity to decide the match. The ball hit Kazemiro, who shot on the ground, but the guard of the hosts managed. Real's pressure continued, with the Whites looking much more dangerous in those final minutes.

Thus came the 89th minute, when the reserve Alex Berenger brought success to Athletic with a shot from the penalty area. In the counterattack Isco could equalize for Real, but failed. Thus, Athletic achieved success and found itself in the role of the favorite to win the King's Cup after the elimination of Madrid and Barcelona.