Barcelona crushed Real Madrid for their first trophy since Messi 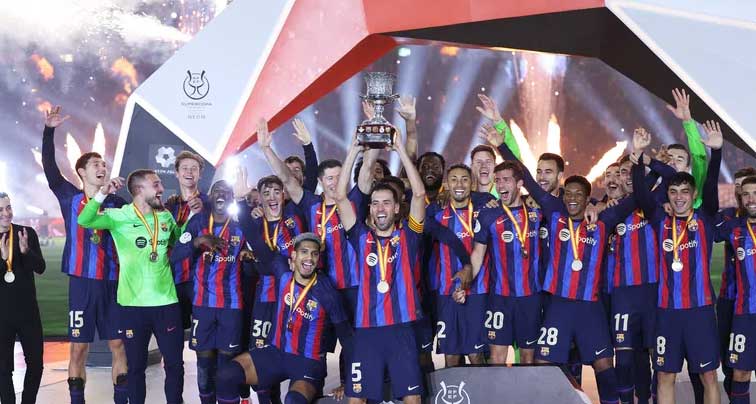 Barcelona recorded another memorable victory over arch-rivals Real Madrid after a convincing 3-1 win in the Spanish Super Cup final in Riyadh.

It is the first trophy for the team without Lionel Messi and the debut for Xavi Hernandez as the Catalans' coach since he took charge of the team 14 months ago. Also with him at the post, "Los Cules" punished the champions last spring - 4:0 in Madrid for the championship.

The final in Saudi Arabia has now turned into a recital by the Spotify Camp Nou team. Gavi made it 1-0 in the 33rd minute and then provided two assists for Robert Lewandowski (45') and Pedri (69').

It was only in added time that Karim Benzema converted for his team. Separately, Leva hit the post at 0:0, and Ousmane Dembele missed alone against the goalkeeper at the beginning of the second half. Real performed extremely poorly, not having a shot on goal until the 70th minute. Karim Benzema could be scored in the 18th.

Thus, Barça won the country's Super Cup for the first time since 2018, being the leader in this indicator with 14 trophies. Real is second with 12.

There were no surprises in the starting line-up for the European champions, with Federico Valverde once again tasked with more offensive duties. Daniel Carvajal was on the right back, and Eder Militao and Antonio Rüdiger acted in the center of the defense. Eduardo Camavinga was also a holder.

The coach of Barca Xavi bet on almost the same line-up that defeated Atlético Madrid in La Liga a week ago. The only difference was that at the top of the attack was Robert Lewandowski instead of Ansu Fati. This time Ronald Araujo played at right back instead of Jules Cunde.

The final got off to a nervous start with a few sharper clashes that quickly built tension. In the 7th minute, Araujo could have struck the first dangerous blow, after he almost missed Pedri's cross from a foul.

In the 9th, the Uruguayan dangerously cut Vinicius Junior near the goal, but escaped without a card. Barca's pressure was evident and in the 13th, Lewandowski fired from outside the penalty area. Courtois dived and cleared, then the ball hit the side post.

Balde had a chance in the extra period, but he shot over the bar. Only then did Real Madrid play and in the 18th Benzema had an excellent chance to stretch the net with his head, but he directed the ball wide of the goal.

"Blaugranas" regained the initiative and in the 33rd Gavi converted for 1:0. He then completed a quick move that went through Dembele, Pedri and Lewandowski.Real Madrid was unable to respond to this goal in any way, as the game of Carlo Ancelotti's team showed great tension.

The Catalans took advantage of this and seconds before the break, Gavi and Lewandowski went out alone against Rudiger and Courtois, with the Pole finishing into an empty net after a perfect assist from his team-mate - 2-0.

At the break, Ancelotti replaced Camavinga with Rodrigo. However, Barca had the first chance to score after Dembele was brought alone against Courtois at an angle in the 51st minute, but the Belgian deflected.

Just four minutes later, the Real keeper had to block with his body and Lewandowski's shot from a tight angle. There followed several attacks for Real, in which the players in white reached the penalty area, but there they lost the ball, not even managing to take a shot.

Xavi's team reached their third goal in the 69th when Gavi assisted again, but this time to Pedri, who, like Leva, could not make a mistake in an empty net - 3:0.

It wasn't until the next attack that Toni Kroos hit Real's first shot on goal. In the 79th, even Ter Stegen had to intervene decisively in order not to concede a goal.

It was only in the final ten minutes that Real Madrid showed a high level, but only reached one goal, scored by Benzema in stoppage time.