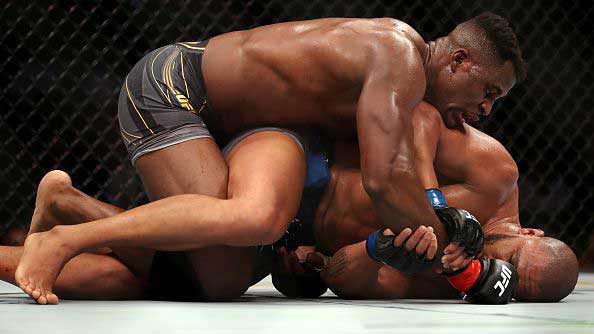 UFC heavyweight champion Francis Nganu inflicted the first loss of Cyril Gan's career with a unanimous decision (48-47, 48-47, 49-46) and convincingly defended his belt, although this did not happen as expected.

Two of the UFC's most sinister knockouts and strikers surprisingly spent most of the fight on the ground, with Nganu making four takedowns and controlling his opponent there for 8:29 minutes (to which must be added a lot of time control through fence grappling).

Gan, on the other hand, had three chances to end the triangle fight, but he could not successfully complete the technique. In the stand, the clearer goals were in the assets of the challenger, but the tactical plan of the Cameroonian turned out to be perfect, unexpected and very effective.

Nganu admitted that the last 10 months have been very difficult for him and after breaking his knee ligaments, he spents a very difficult camp for the match and even wanted to give up the fight. In his statement after the victory, the Cameroonian added that he does not rule out a career in boxing, after recently Tyson Fury even showed interest in a duel in the ring with him.

In the first round, the two did not offer much action and lurked more from the middle of the cage, and there were two moments in favor of Nganu, when he had pressed the opponent on the fence. Gan scored more significant goals (13-9), but the clearest of them were the leading left straight, while the champion had a terrible attack with combinations of 3-4 hooks and uppercuts.

However, the Cameroonian could not aim well at his opponent and put him to sleep in the second round, as it was impressive that both of them did not want to shorten the distance and look for takedowns. Gan made a nice right kick with a turn and a nice upper end to the end of the round, which gave him an advantage in scoring, while Nganu was too passive.

Surprisingly, the champion recorded a takedown in the first minute of the third round and became the first fighter in UFC history to knock Gan to the ground. He went into sideways control instantly and tried to adjust to ground and pound, but to no avail, trying to go full guard. Nganu tried a triangle with his legs because Gan gave him his back, but without success, without the guillotine technique.

The Cameroonian was clearly not a great master of the land and they both stood up, and at the very end of the round another takedown was recorded in the assets of the champion. He improved his own record in this regard with the second, but even after that he could not reach the end.

The fourth round also did not offer the expected action in a stand, especially from Nganu, who, however, recorded a third takedown and immediately embraced his opponent, although again he could not impose a ground and pound. The Cameroonian could not move from semi-guard to full guard, but he was already gaining more than 3 minutes of ground control, which was also significant in the eyes of the judges. Although again there was no significant ground-pound, Nganu showed good condition and secured another round of the account.

Gan scored a great combination of left-right straight at the beginning of the last part and took a takedown in turn, immediately entering full guard and trying to end the fight with a key on his leg. Many times Nganu slipped out of the technique and in the latter case went full guard, recording light attacks in the body of his opponent.

Referee Herb Dean warned the two to "work" and be active in this position, which was otherwise entirely in favor of the champion. He himself was in no hurry and waited for the end of the battle from a dominant position on the ground, which he did enough to tactically outplay the challenger.