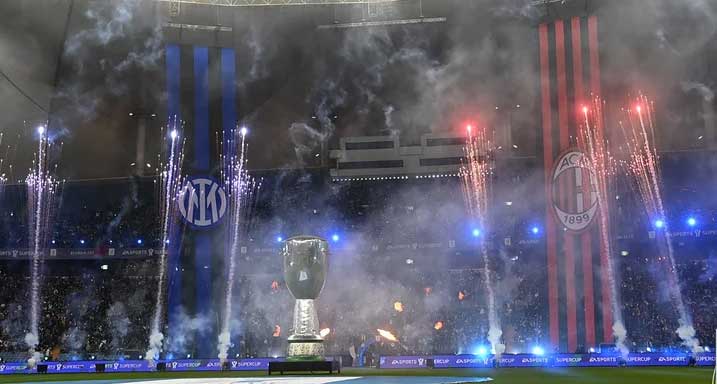 Inter are the winners of this year's Italian Super Cup after winning the derby against AC Milan 3-0 in their clash in Riyadh, Saudi Arabia. Federico Dimarco (10'), Edin Dzeko (21') and Lautaro Martinez (77') scored the goals with which the Nerazzurri defended last year's trophy.

Thus they triumphed with their seventh Super Cup, leveling precisely with their city rival.Stefano Pioli made three changes to his starting line-up after the team's last match.

Simon Kjaer, who has recovered from his injury, returned as a starter in the center of defense at the expense of Pierre Caulieu. Sandro Tonali served his suspension and replaced Tommaso Pobega in midfield. Junior Mesias was acting as the right wing this time instead of Alexis Salemakers. Olivier Giroud was again placed at the top of the attack.

Simone Inzaghi made just one change to his starting XI compared to the team's previous clash. It was linked to the emergence of Niccolò Barella in midfield and thus Roberto Gagliardini was a reserve. Romelu Lukaku was also on the bench, which meant that the two strikers remained Lautaro and Dzeko.

In the seventh minute, Dzeko shot from a distance, but missed the target. Three minutes later, the Nerazzurri launched a wonderful attack and the unmarked Federico Dimarco was able to open the scoring in their favor. In doing so, he became the first player born in Milan to score for Inter in the Derby della Madonnina since 1968.

In the 17th minute, Rafael Leao created the first danger for the Rossoneri, but Andre Onana cleared his shot from a small angle.

In the 21st minute, Alessandro Bastoni passed Dzeko, who feinted Tonali and sent the ball past Ciprian Tatarushanu for his team's second goal. Thus, the 36-year-old forward became the oldest scorer in a match for the Super Cup. In the 28th minute, he could have scored once again, but the goalkeeper managed to save his shot after a corner.

Dimarco's long shot followed, which was deflected by Tatarushanu. In the 38th minute, Leao also tried a long-range shot, but it was inaccurate. The last pass for the first part went to Fikayo Tomori.

The second half started with shots from Theo Hernandez and Ismael Benasser, but neither was on target. Leao then took a dribble and shot but sent the ball over the goal. In the 56th minute, Benasser made another attempt to score, but Onana caught the ball.

The same thing happened with a shot by Leao in the 67th minute, and shortly after, Tatarusanu dealt with a shot by Milan Skriniar.The "Snake" patiently waited for his moment for his third goal, which came in the 77th minute.

Then Lautaro overcame Tomori with ease and sent the ball into the opponent's net with a technical kick for the final score. He then took off his shirt and showed it to the fans in the nearby stands. In the remaining time, the "Rossoneri" reached only one post after a cross from the reserve Ante Rebic.