Steph Curry performed well at Christmas, and Golden State is again №1 in the NBA 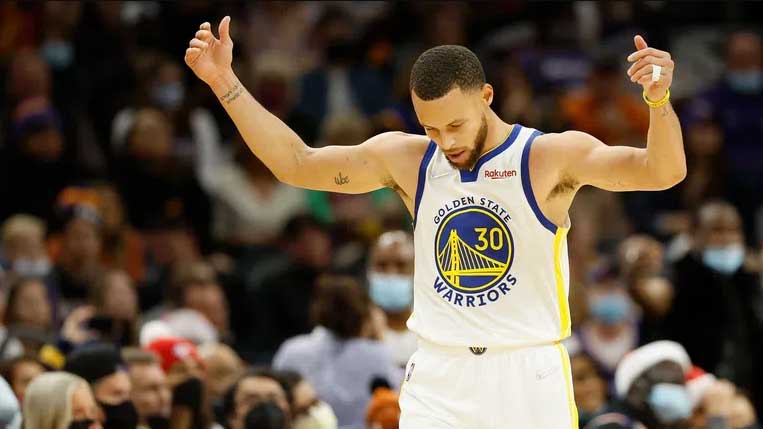 The team of Golden State Warriors recorded a second consecutive victory over the Phoenix Suns in another dispute for the first place in the Western Conference standings this season between the two teams. The "Wars" overcame a number of personnel problems in their team and managed to snatch the success of their visit to the "Footprint Center" with the final 116: 107 (33:27, 25:35, 26:22, 32:23) in the third game of Christmas NBA program tonight.

In this way, Steve Kerr's alumni regain their leadership position both in the West and throughout the NBA, and now have a 27-6 balance sheet during the campaign. The "Suns" suffered their first loss in five meetings and now occupy the second place with an asset of 26 successes and 6 defeats.

Golden State superstar Steph Curry has finally managed to make a strong match on Christmas, after averaging 13.0 points per game in his previous 8 holiday matches. Tonight, for the first time in his career, Steph scored at least 20 points on Christmas, leading the "wars" to victory with 33 points, 4 rebounds and 6 assists, with him on the floor California beat the hosts by 24 points in 37 minutes in play.

However, the great hero of the Warriors' victory this time was not named Steph Curry. His role with heavy and important shots at the end was taken by winger Otto Porter Jr., who took responsibility and scored the last 7 points in the match to raise the difference from 109: 107 to the final 116: 107 in the last two minutes of play. The former Washington Wizards and Chicago Bulls player finished the game with an efficient 19 points in an 8/13 shooting.

The "wars" maybe even more proud of their victory over their direct rival in the conference due to the fact that they achieved it without some of their main players. Andrew Wiggins, Jordan Poole, Damien Lee and Andre Iguodala did not take part in the match, while Clay Thompson and James Wiseman are still awaiting their debuts. Frank Kaminski, Abdel Nader and Dario Saric were missing for the "suns".

Gary Peyton also played a very strong match and finished with 14 points and 8 rebounds in a 6/9 shot for the victory of GSU. Jonathan Cuminga scored 12 points from the bench, and Nemanja Bielica scored another 10 points.

For Phoenix, the best scorer was the guard Paul Paul with his 21 points, 6 rebounds and 8 assists. Diandre Eaton scored 18 points, Michael Bridges scored 17 and Devin Booker was held to just 13 points in 5/19 shots. Cameron Johnson made a strong start in the last quarter and finished with 11 points.

In his next game, Phoenix will try to regain his top briefly if he defeats the Memphis Grizzlies on Tuesday morning, while one night later Golden State will fight to keep the top against Nikola Jokic and the Denver Nuggets.